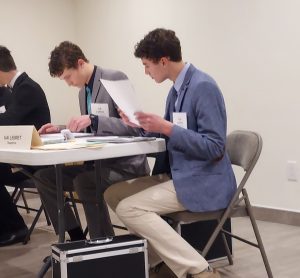 Ambassadors In the Making

We offer opportunities to learn various speech events, apologetics and debate styles such as Team Policy, Lincoln Douglas, and Parliamentary debate through coaching and competitive tournaments.  In addition to developing rhetoric and researching skills, students also grow their faith and character while developing strong friendships.

Our club’s purpose is to teach, train, and build up the speaking skills of our Christian young men and women in order to honor and profess Christ and His Kingdom.  This purpose is achieved by participating in competitive speech and debate through the Stoa Speech and Debate league.  For this reason, all club members are required to compete in at least two Stoa sanctioned speech and/or debate tournaments during the tournament season which runs from November through April.  Additionally, our club requires participation and competition in the Apologetics category.  All other speeches and debate forms are optional, although we highly recommend competing in other speech categories and debate.

“Therefore, we are ambassadors for Christ, as though God were making an appeal through us.”  2 Corinthians 5:20

We are equipping our youth for things that matter

Learn More About Us